We wouldn’t shop where we socialize. Or would we?

You’ve heard it before, and chances are; you’ve said it yourself: “Why don’t they just stop running all those ads on Facebook?- nobody clicks on them anyway.” You are, of course well-justified in asking this question, since you for one, have never clicked on Ads on Facebook yourself, right? And you also don’t know anyone who clicks on them; either since those Ads are really not relevant, or purely because they’re just an annoying disturbance. So, the big question that remains is: Why DO they advertise on Facebook despite all the apparent ineffectiveness? Why do they still believe there is merit in allocating Advertising dollars to Social Media in general and Facebook in particular?

The fact most of us are in agreement about is, social media works at several levels. It works because it brings together Paid, Owned, Earned and Shared media all under roof. It works because at its very core; it’s a contemporary form of two of the most ancient forms of marketing: Word-of-mouth publicity and Two-way conversation. It works because at the end of the day, all businesses consist of people working with other people – and Social Media helps make your business more appealing to those other people by adding a voice and human quality to your business and brand.

Now comes the debatable aspect of the story. Does Paid-for Social Media marketing give you bang for your buck? Well, if you choose to focus on the right parameters, and remind yourself that this is just the tip of a huge, uncharted iceberg – the amazing potential Facebook holds as a marketing platform shines through all the cynicism.

TBG Digital’s Quarterly Facebook Advertising report (Q1 – 2012) has brought to attention how the engagement rates of Ads on Facebook have dropped by 8% since the end of last year, while Impressions (CPMs) and Clicks (CPCs) have become more expensive for Marketers and have risen by 41% and 23% respectively. However, it’s not that startling a development when you consider the fact that the number of Ads per page on Facebook have increased from 4 to 7. Banner Blindness is a well-acknowledged, universally present online phenomenon – not exclusive to Facebook. Facebook’s problem has more to do with Contextual relevance and Ad placement than mere Banner blindness. As a testimony to that, the same report also brings forth the remarkable success news partners have had on Facebook (Aka the Social Readers) – Click-through Rates for them have increased by a whopping 196% during a three-month period.

In effect, this is what all these statistics point to:

1. Contextual relevance: Don’t show me Ads that are not relevant to me. 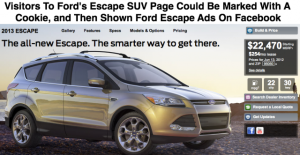 An example of a Retargeted Ad via Facebook Exchange
(Image Source: http://www.techcrunch.com)

Retargeted Ads are based on Search and buying history that is recorded via cookies. There is an inherent similarity Facebook shares with Yahoo Mail w.r.t to the way its users interact with the site: Users usually stay logged onto the site on another tab/window while they continue with their other online activities. Key opportunities?: Cookies, and more cookies and therefore a golden opportunity to use Ad inventory for showing Ads that are relevant what the user’s actually been looking for! This strategy has served Yahoo very well, as it most likely will Facebook.

2. Placement: If you show me an Ad where I expect to see it, chances are I won’t click on it (or even notice it, for that matter).

The tremendous success rate of Facebook’s News partners proves that there may be a better way to make users sit up and take notice. Smart, non-intrusive integration of content in users’ news feeds would generate more interest and serve as an Ad in itself. If people see interesting content suggestions in their News Feed they’d actually appreciate checking out basis what they know they have enjoyed in the past; they likely wouldn’t dismiss those off as instantly as the Ads they are inclined to. Assuming of course, they don’t foresee clicking on them to be a cause of potential social embarrassment. 🙂

Which brings us to answering the question brought up at the beginning of this post. The reason marketers still continue to believe it makes sense and cents to include Facebook in their media plans is that Facebook has not only understood the challenges of contextual relevance and Ad placement – but has also taken 3 very promising measures to address them:

A. The Open Graph – which lets users share select activities on Facebook and presents marketers with branding opportunities at those milestones

C. The ‘Want’ Button – which lets users create their own product wishlists on Facebook

There is a catch to this, of course. All these functionalities are in varying degrees of nascency currently and Facebook has arrived pretty late to the Retargeting/ Ad optimization party. So whether or not Facebook succeeds in leveraging its true potential and optimizing its revenue stream – is something we will know in due time. If Facebook does drop the ball though, it will be quite a shame, since it is their battle to lose.